Ceramics have been tested and used in ball, roller and plain bearings (bushings). Their potential to resist fatigue, high temperature and loss of lubrication is better than for metals, making ceramics attractive for ball and roller bearings
BRAND: KMK from：Sino Bearings


Ceramics have been tested and used in ball, roller and plain bearings (bushings). Their potential to resist fatigue, high temperature and loss of lubrication is better than for metals, making ceramics attractive for ball and roller bearings. There are a number of commercially available ceramic bearing types, grouped into one of two categories: all-ceramic or hybrid.

Hybrid bearings are finding applications in a growing range of high-speed machines. These include machine-tool spindles which employ ceramics because of their lower centrifugal forces. Centrifugal effects, which can lead to skidding, are proportional to the mass of the balls, so that replacement of steel balls (density 8 g/cm3) with silicon nitride (density 3.1 g/cm3) greatly reduces the stress on the outer race. Another application for hybrids is the use of single crystals of alumina as 'jewel' bearing materials for watches, clocks, gyroscopes and similar precision equipment. Alumina is also used for circulating pump bearings in central heating systems, washing machines and car cooling systems because of its wear resistance, hardness and mechanical strength.

Ceramic rolling elements offer many advantages over traditional bearing elements. These include improved corrosion resistance, lower density, higher hardness, higher compressive strength and longer fatigue life. Typical ceramics that have been used for bearing materials, along with some of their mechanical properties, are shown in the table below.

Back in 2000, scientists discovered zircon in rocks that showed life might have started 500 million years earlier than previously thought. This incredible compound has made a huge impact, as has its oxide, zirconia (ZrO2), used to make full ceramic bearings. But are the increased costs worth it?

Full ceramic bearings are generally rounder, smoother and harder than steel, offering superior corrosion and heat resistance, higher dimensional stability and lower density. However, this comes at a cost. Ceramic bearings are significantly more expensive than their steel counterparts.

So, when does investing in ceramic bearings become worth it?

High value applications, like lab equipment, has exact requirements that need to be hit every time the application is used. Using the wrong components in such equipment can contaminate study conditions, or cause the study to cease altogether. This is the same with medical equipment, where the non-contaminating and non-magnetic properties of ceramic bearings prove vital.

Take Magnetic Resonance Imaging (MRI) for example, the imaging technique associated mostly with hospital MRI scanners. This technology uses a strong magnetic field to generate two- or three-dimensional images of any living subject. Standard steel bearings cannot be used in these scanners owing to their magnetic properties, so ceramic bearings are the best choice to use in these high-value applications.

Using bearings made from silicon nitride, rather than the standard alumina (aluminium oxide), provides electrical insulation and good corrosion resistance.

Silicon nitride’s resistivity and dielectric constant are similar to that of alumina, but the material is far stronger because of its microstructure. Full ceramic bearings can accommodate the many challenging conditions present during the stages of semiconductor production; from furnace temperatures that can reach close to 1400 °C to cleanroom 1 air quality. Suddenly, the increased costs are clearly justified.

There are a number of commercially available ceramic bearing types, all which offer many advantages compared with traditional bearing elements. Typical ceramics that are used as bearing materials are silicon nitride (Si3N4), and zirconia (ZrO2). 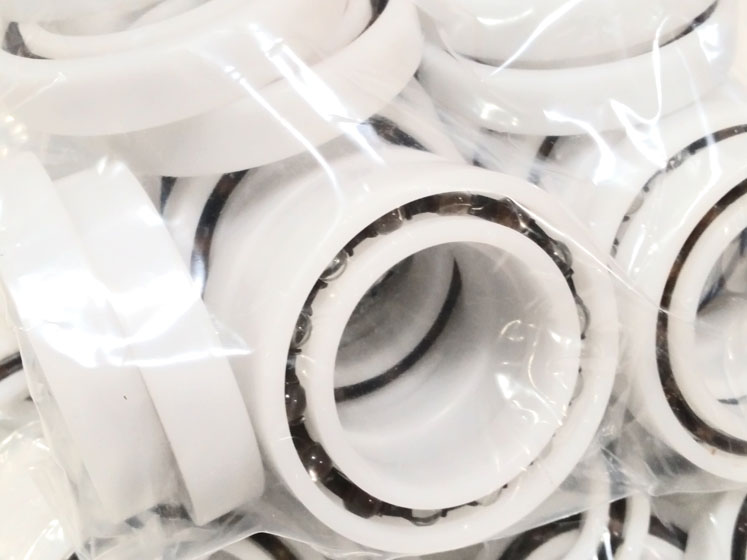 Silicon nitride is a very hard but also very light material. Boasting an excellent resistance to water, saltwater and many acids and alkalis, it also has a very wide temperature range and is suitable for use in high vacuum applications.

The extreme hardness of silicon nitride also means greater brittleness, so shock or impact loads should be minimised to avoid the risk of cracking.

Silicon nitride has been deployed as the main material in several aerospace applications. Notably, NASA’s space shuttles were originally made with steel bearings within their turbo pumps — not a good combination when the space shuttle, and particularly its engines, experienced immense loads and temperatures.

Because of these extreme loads, NASA engineers upgraded the bearings to the silicon nitride equivalent, owing to its superiority in vacuum environments. Impressively, according to the NASA analysis report, Si3N4 bearings showed a 40% gain in runtime compared with their steel bearing counterparts.

Ceramic bearings made from ZrO2, or zirconium dioxide, is a tough ceramic material with very similar expansion properties to steel, although they are 30% lighter. This is an advantage when considering shaft and housing fits for higher temperature applications, where bearing expansion could mean the shaft no longer fits.

Although they are usually referred to as ZrO2 bearings, they are actually made from ZrO2 stabilised with yttrium oxide, which gives the material greater strength and fracture resistance at room temperature.

They are also extremely water resistant, meaning that they are often used in marine applications, particularly where the equipment is fully submerged, or where traditional steel bearings will not cope with the load or speed.

Weighing up whether a Si3N4 or a ZrO2 bearing is the right option is a complex decision, but generally speaking, ZrO2 bearings are more commonly specified due to their extreme corrosion resistance and tougher properties.

When most people think of ceramic bearings, they are usually referring to hybrid versions. Hybrid bearings sit in the middle of ceramic and steel, typically including stainless steel races or rings and ceramic balls.

The steel inner and outer rings of a hybrid bearing can be machined to very close tolerances, meaning that they are best suited for applications such as electric motors, laboratory equipment and machine tooling.

On a grinder machine for example, 25% higher revolutions per minute (RPM) can be achieved by adding in ceramic hybrid bearings and synthetic grease lubricant owing to the reduced friction. Grinding spindles with hybrid ceramics may run 4000 hours without problems, compared with 3000 hours with steel bearings.

Hybrid bearings can also lower temperatures by nearly 50%. In a horizontal machining centre, switching from traditional bearings to the hybrid alternative has been shown to drop bearing temperature from 60 °C to 36 °C at 12,000 RPM.

Using a hybrid bearing combination allows for higher speeds than full ceramic options, as the less brittle metal rings are not as prone to sudden catastrophic failure under high speed or load. That said, a hybrid bearing’s corrosion resistance pales in comparison to a full ceramic equivalent.

Specifying the right bearings for extreme environments has always been a complex issue. But just as Zirconia clarified the origin of life, asking these three questions will help with the decision making process.

We supply high quality KMK brand bearings, chains, belts, oil seals, snap rings.... We can also do OEM for your own brand. Contact our sales team sales@sinobearings.com for quick response.